Fully restored and on display at the Longview Public Library in Longview, WA: http://goo.gl/WYy1Ra

For many local families, logging is a way of life that stretches back 150 years. It has always been a dangerous calling, especially in its early years, when logs were huge and few regulations governed life in the woods. In those early years, too, it took a lot of muscle to get this region’s giant logs out of the woods to waterways or mills.

Ephraim Shay (1839 -1916) was a Michigan logger and railway owner who wanted a better way to move logs than on winter snow sleds. So he invented the Shay steam locomotive in 1877. It has a distinctive “gear-driven” drive train. Shay made about 3,500 of the engines in various sizes. Only about 120 survive.

Long-Bell Lumber Co. presented the city of Longview with its 50-foot Shay locomotive in 1956 to display as a tribute to the city’s logging roots. The city placed it next to the public library. Unprotected from the weather, thieves and vandals, the engine rusted on the lawn until the mid-1990s.

In 1998, Longview businessmen John Chilson and Jeff Wilson removed the 48-ton locomotive from the library grounds and began restoring it. They personally invested $140,000 in the project over the next several years. Volunteers from ILWU 21 provided the necessary trade skills. On Oct. 16, 2013, the group brought the Shay back to the library grounds, where the engine sits on a rock bed and railroad tracks. Construction of a timbered pavilion has been completed to shelter the engine, with Brian Magnuson of Cascade Networks leading that portion of the project.

The refurbished engine won’t haul another load of logs, but it is a reminder of the mechanical muscle that built this community. 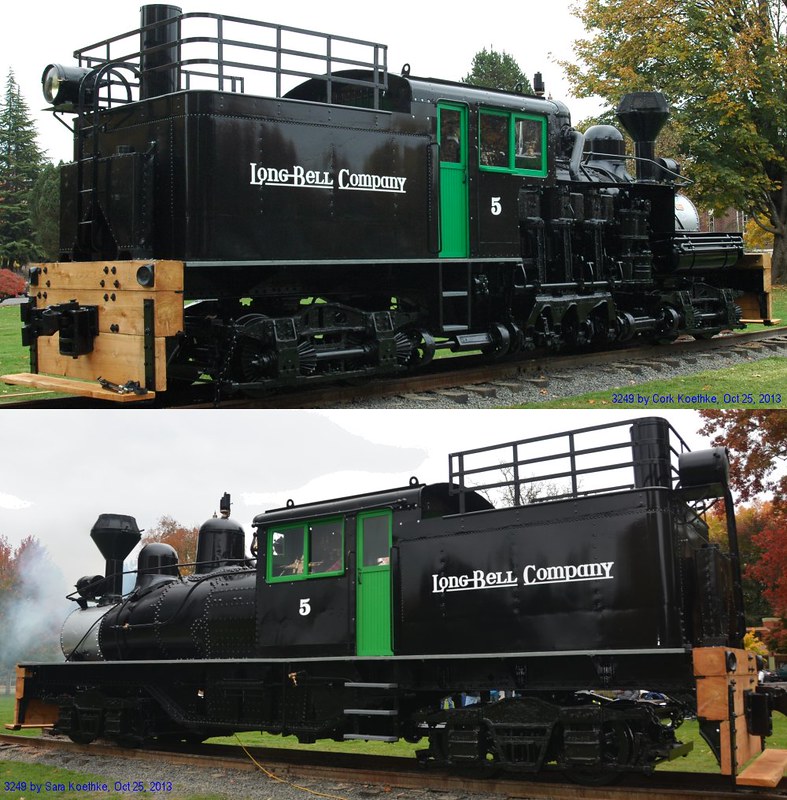 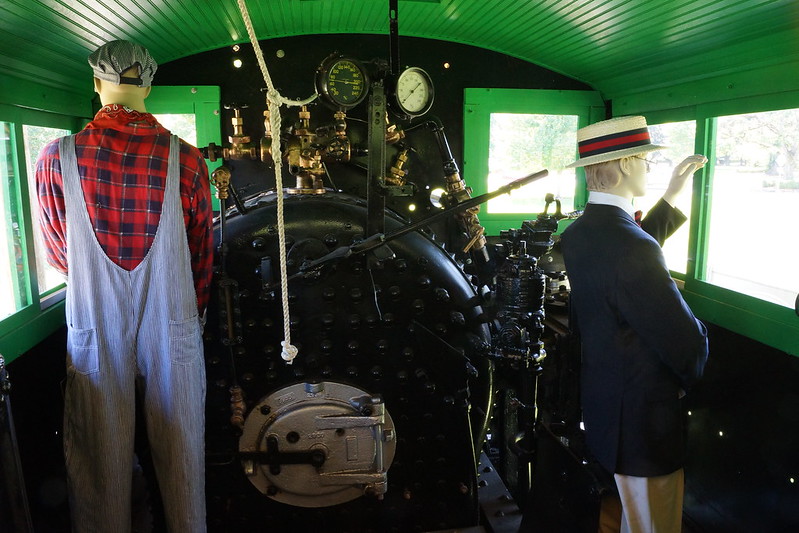 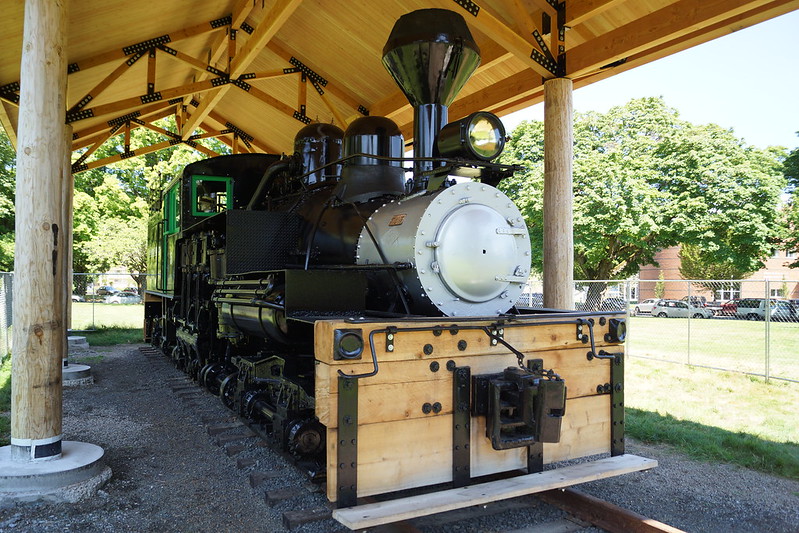 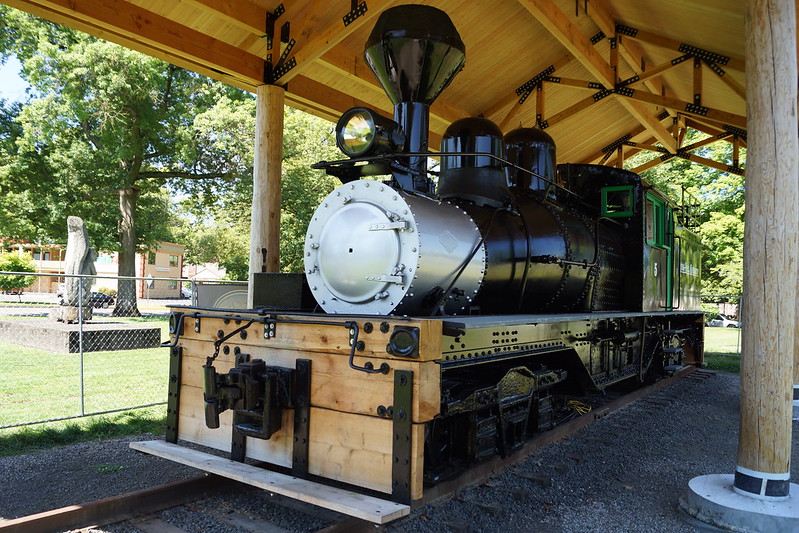 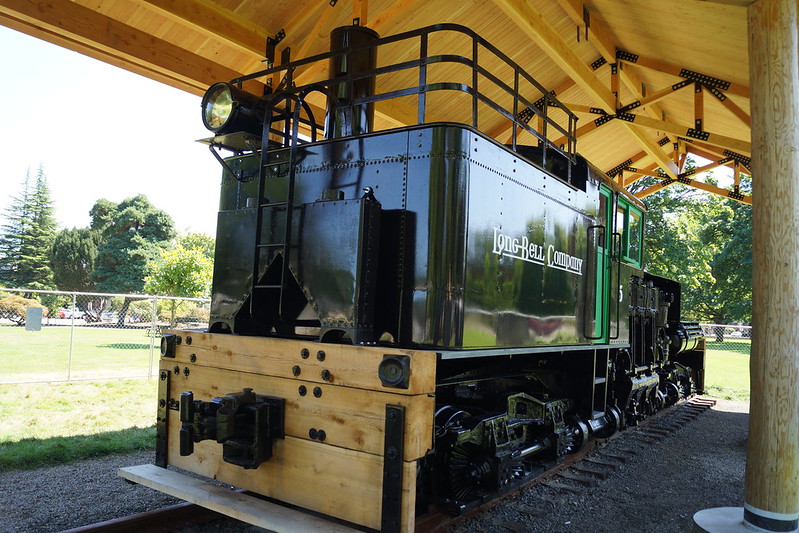 Click the link above the photo. Then hit the play button to spin around the Shay. Click at any time to stop and zoom in for amazing detail. Use your mouse to move around and explore the Shay.

Click the link above the photo. Then hit the play button to spin around the Shay. Click at any time to stop and zoom in for amazing detail. Use your mouse to move around and explore the Shay.

Disposition:
(3-1-1998) Removed from display and dissembled at Port of Longview, Longview, WA
Under restoration by John Chilson in Columbia Heights (Longview), WA
(2005) Restoration complete, awaiting building of pavilion cover to return to Longview for display. 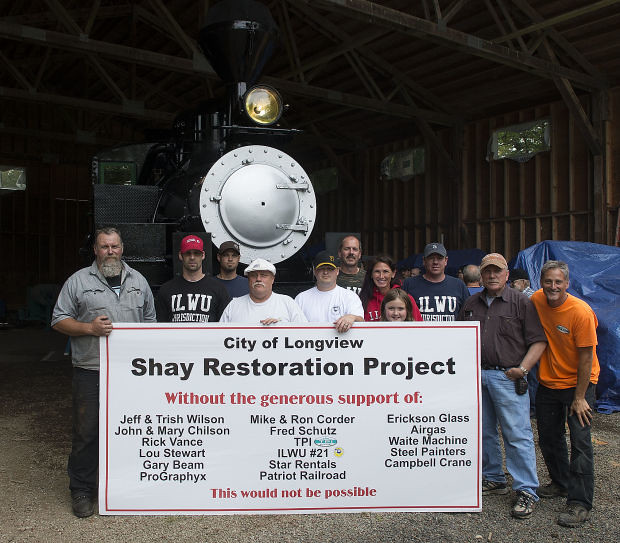 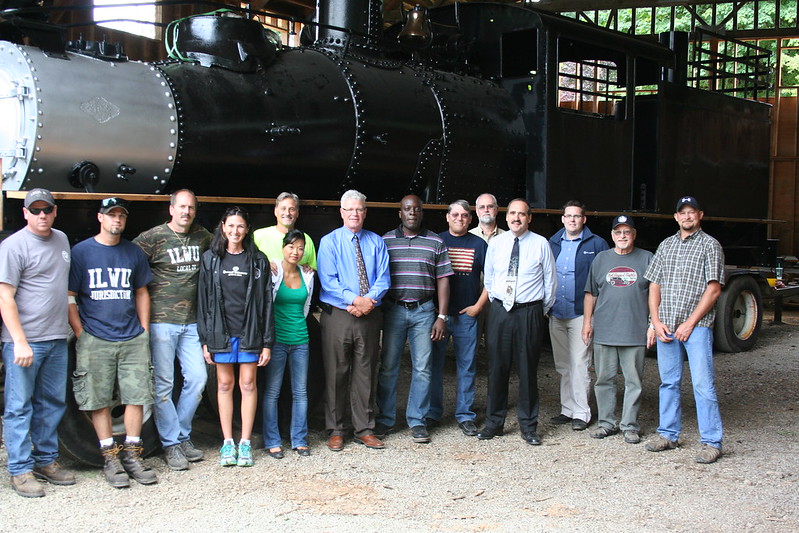 The Shay Locomotive on the Longview Public Library Lawn October 25, 2013

The Friends of Longview are on a treasure hunt, but the only map the nonprofit group has is a list of appraised coins.

It’s been 10 decades in the making, and R.A. Long himself might be pleased to see what his successors have done with the place. That doesn’t mean the history and

Behind the scenes, the roof of the pavilion that will cover the historic Shay locomotive on the Longview Library lawn is taking shape.

Mason Pomerinke, 9, rings the bell while his sister Aysha, 12, moves the throttle inside the Shay locomotive outside the Longview Public Library on Tuesday night.

The historic Shay locomotive, a relic of Longview’s logging heyday, is back home.

A crew moves the historic Shay locomotive from Columbia Heights to its former resting spot near the Longview Public Library.

At Brian Magnuson’s signal, Scott DeRosier dumps a load of rock Friday around the railroad tracks placed this week on the Longview Library lawn for the return of the restored

The Friends of Longview nonprofit group Tuesday announced it will match all donations to the Shay Locomotive pavilion up to maximum of $1,500. Any gift will be doubled until the

After a long absence, the restored 1924 Shay logging locomotive will return to the Longview Library lawn next month.

Ask and ye shall receive.

An anonymous donor is challenging community members to write some $1,000 checks to fuel the city of Longview’s Shay locomotive pavilion fundraiser.

In two weeks, the city of Longview has received $925 in private donations to build a pavilion on the public library lawn for the newly restored Shay Locomotive.

The historic Shay logging locomotive could be back on the Longview Library lawn this summer if the city can raise enough private donations, materials and in-kind labor in the next

The city of Longview is seeking private donations this month to build a 20-by-60-foot pavilion to shelter the Shay locomotive once it’s moved to the Longview Library lawn.

Progress on moving the restored Shay Locomotive back to its old site on the Longview Library lawn is chugging along slowly.

Shay locomotive to be reassembled at the Civic Circle this spring. December 18, 2011

Shay locomotive to be reassembled beside library. October 13, 2011

Restored 1924 locomotive may be destined for return to library. October 11, 2011

Footage of the Cass Scenic Railway in Cass West Virginia, recorded from Monday, July 9, 2012 through Wednesday July 11, 2012. This video includes an overview...

The History of Longview, WA

The Cowlitz County Historical Museum's ongoing work is to preserve our regional heritage for public enjoyment and education, now and for future generations. (360) 577-3119 Go back to: Historical Museums in Southwest Washington: http://www.bagtheweb.com/b/nXMUz6 Go back to: Fun Things To Do in Southwest Washington: http://www.bagtheweb.com/b/H6oKm3

Want to know more about Cowlitz County, WA? Here you will find links to County and State web resources.

This is a listing of over 600 Vintage and Antique Stores in Washington and Oregon. To find stores, look in the right column under "Related Bags" to find an area you would like to explore. There are 45 different areas with maps! The areas are listed in a general direction of North to South. Click on desired area to reveal a Google Map with each...