The most anticipated annual TED conference is back again! This bag aims to collect buzz on the amazing conversations.

New Scientist: Economics, politics and ukelele: day one at TED

Where else can you hear a Nobel prizewinning economist talk about happiness, a candidate for British prime minister talk about the information revolution and a ukulele virtuoso play Queen's Bohemian Rhapsody all in the same hour?That's what I was thinking to myself as the first session of talks at TED 2010 wrapped up this (Wednesday) morning.

Huffingtonpost: Can Simplicity and Innovation Overcome Complexity and Cynicism? (by Arianna Huffington)

I asked him what, in the amazingly diverse TED program, would be the sessions that most directly counter the predicament he laid out. "Session 11," he said. "It's the one on simplicity. We are choking ourselves in a web of complexity. Our financial system is so complex it can't be regulated. The health care plan is so complex no one understands it. Our politics is so complex it's become a complete mess."

And while Democrats, Republicans, and the various factions and splinter groups may be willing to hold their ground and tough out the economic and environmental tsunami that is on the horizon -- there's no one who comes to TED who's that sanguine about the issues that face us.This is a conference of doers, folks who make things and do things and are here to share what they know and leave with new found inspiration.

Set up an organization to create a popular movement that will inspire people to change the way they eat. The movement will do this by establishing a network of community kitchens; launching a travelling food theater that will teach kids practical food and cooking skills in an entertaining way and provide basic training for parents and professionals; and bringing millions of people together through an online community to drive the fight against obesity. The grassroots movement must also challenge corporate America to support meaningful programs that will change the culture of junk food.

For those of you who doesn't know, here is a way to track TED2010 for more indepth reports/features:Go to Google News, and search "TED2010", there you would find many blog posts on TED2010

For ten plus years now, TED has been one of my favorite weeks of the year. It’s a rare gathering: an incredibly dynamic and interesting set of people together for a week of “pop intellect” to stimulate the mind and soul. Here are a few highlights from Day One at TED 2010.

Instead, this conference is all about self-enrichment, inspiration and, of course, plenty of networking. One person told me it was like "a semester of graduate school" packed into four days. During this moment of huge uncertainty in the world, the conference seemed to take on even greater significance as people seemed more willing to entertain a wide range of approaches to the world's problem, given that so much of our conventional wisdom seems to be failing us on so many levels.

Spider webs may be a nuisance in your home, but it turns out the silk used to form some webs is comparable to Kevlar in strength and may protect soldiers on the battlefield one day, says UC Riverside biology professor Cheryl Hayashi.

What one pound of tuna has to do with five years of chocolate milk, spider silk and a ukulele...We’re thrilled to be reporting — and live-tweeting — from TED 2010, themed What The World Needs Now. Here are some highlights from an exhilarating and punchy first day, which opened with an appropriately bold address from Chris Anderson.

Blood vessels, literally the lifelines in our bodies, are key to delivering the nutrients our organs need to survive. But they have a deadly side in that they also feed cancerous growths.

Treatments for halting the growth of cancer-feeding blood vessels could be key to treating tumors and could also have positive effects on reducing obesity, according to Dr. William Li, head of the Angiogenesis Foundation, a non-profit behind much of the research into these new treatments.

Highlights from TED 2010, Wednesday: "We can eat to starve cancer", by Mark Frauenfelder at 4:58 PM

At the end of day of the first day of TED2010 my brain feels like a squishy water balloon nearly filled to the max. As a raving TED Talk enthusiast I kept my learning receptors on high and it was well worth it. 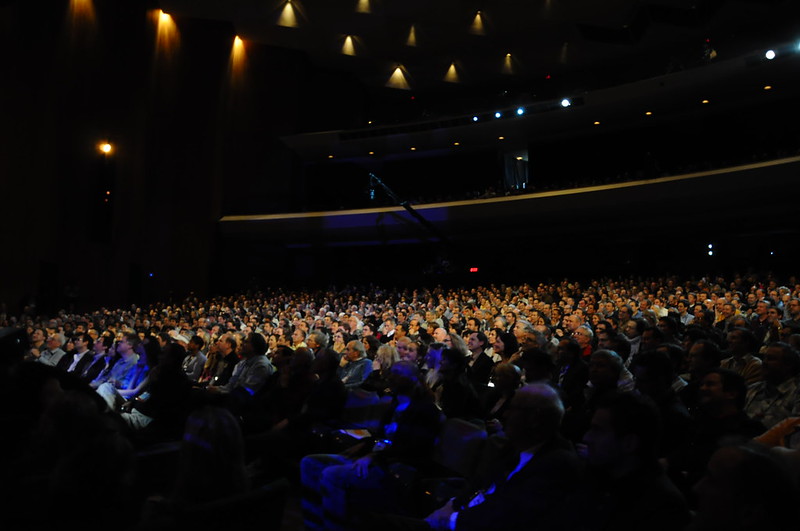 What is it about TED, the iconic conference founded an astonishing 25 years ago, that gets so many people who don't go in a lather? Nonetheless, the gathering still represents one of the best venues for deep and varied thinking on a wide range of important issues, even if there are moments that might seem twee and elitist to some. TED2010 officially opens tomorrow morning in Long Beach, Calif., although events at the conference actually began last night. Speakers run the gamut and will talk on a wide range of topics, from poverty to clean tech to global warming to ukulele playing.

Moments after marine explorer Sylvia Earle finished her passionate plea to preserve vast stretches of the world's oceans at last year's TED conference, a foundation executive walked up to her and pledged a million dollars for the cause.

The four-day, $6,000 a head, invitation-only event, dubbed “Davos for the Digerati set,” will gather industry titans, celebrities, academics and alpha geeks for its 26th year. This year’s overall theme is “What the World Needs Now,” with separate themes listed for each track of speakers.

But when people invite you to a conference that costs everyone else $6,000 they are laying a huge responsibility to that person.The question is, what’s the responsibility? For me, I’m going to try to get as many interviews as I can outside of the main room. That’s one way of delivering value to you. But that’s just the baseline of the kind of responsibility that I’m feeling going into this. Can I step up my game this year?

SocialEarth is a fresh, entrepreneurial and socially mindful weblog focusing on businesses that are doing good through their work. At SocialEarth, they believe the future of our livelihoods and our world depends on the creation and sustainability of such businesses.

Brain Pickings is the brain child of Maria Popova, a cultural curator and curious mind at large. Brain Pickings is about curating interestingness — picking culture’s collective brain for tidbits of stuff that inspires, revolutionizes, or simply makes us think. It’s about innovation and authenticity and all those other things that have become fluff phrases...

Richard Galant and John D. Sutter from CNN in the press room at TED. They've been filing dispatches of the presentations and other events there and they are terrific.

Wired is a full-color monthly American magazine and on-line periodical, published since March 1993, that reports on how technology affects culture, the economy, and politics. TED (Technology, Entertainment, Design) is a U.S private nonprofit foundation best known for its conferences, now held in Europe and Asia as well as the U.S., devoted to what it...

Mashable is an Internet news blog, started by Pete Cashmore in July 2005. With a reported 7+ million monthly pageviews and an Alexa ranking just over 400, it ranks as one of the largest blogs on the Internet. Mashable launched a dedicated TED channel at http://mashable.com/ted

Haiti News in the World Media