Graphic design trends---like all trends, really---come and go. And right now designers can't get enough of these 3-D visual identities.

Created in 1999 by Pile and Company, Agency Compile is a website for marketers looking to stay current on the agency landscape and a place for agencies to share their latest creative, clients, news and more.

One of the guys we know that used to work at DDB has this to say about it:

Wankery. What I really liked about the old logo, was the “B” in the center. As in, the spirit of Bill Bernbach sits at the heart of the core of everything the agency does.

Now it’s just some letters with a fucking degree symbol next to it. Fail.

» DDB Rebranding advertising/design goodness – advertising and design blog: The best ads & designs and sometimes the wo

Advertising/Design Goodness, adgoodness. An advertising blog / design blog / advertising community archive /concentrating on the best and sometimes the worst ads and design around the globe. By Frederik Samuel.

DDB (the advertising agency) has undergone a global rebrand. They got rid of the black circle around the logo, which had a very 90′s like feeling to it. They did keep the circle, but it’s now a “degree” symbol. I like the new logo better than the old one, and think it will work for them.

What are your thoughts on this? 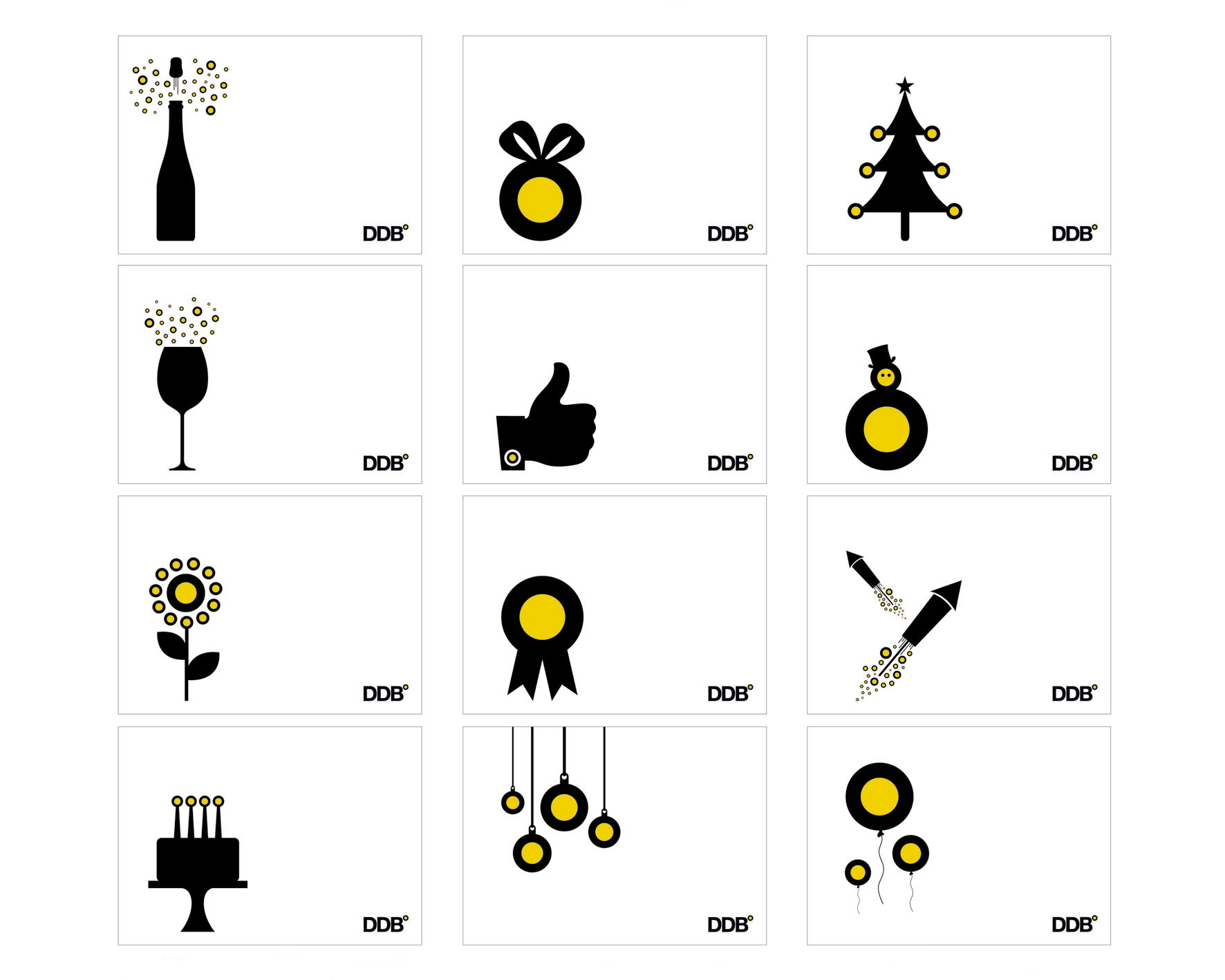 There are jobs and there are big jobs. There are also huge jobs. And then there’s the change in LMT brand identity. Six months is quite a long period in Latvia’s advertising industry. But it’s exactly how much time was needed.

A change in a brand’s graphic identity can come about for a number of reasons – taste, management or reputation can change... It was important for LMT to announce changes in the company’s business strategy and in its relationships with its audience.

Almost the whole agency works on a project of that size. The coordination of work and opinions is of critical importance. DDB Latvia Strategic Director Edgars Pētersons says: “We breached the strange division of the “creative” versus the “rational”, the “agency” versus the “customer”, which also allowed us to reach a high quality result. We involved a wide range of representatives from LMT, design, strategy and project management teams in all stages of the project. The office which was allocated to us, DDB Latvia, in the building at Ropažu iela 6 for the duration of the project, was like a symbol of this cooperation.”

The dynamics of place brands

Symbol (Mini) [Steven Bateman, Angus Hyland] on Amazon.com. *FREE* shipping on qualifying offers. Symbols play an integral role in branding programs. This book explores the visual language of symbols according to their most basic element: form. Over 1

Logo: The Reference Guide to Symbols and Logotypes (Mini) [Michael Evamy] on Amazon.com. *FREE* shipping on qualifying offers. The next time you are tempted to design a logo, take a look at this book. Chances are, it has already been done. By raising the bar

The Tyranny of the Tagline: Design Observer

And working with taglines is challenging for a graphic designer. When they're freshly minted, clients tend to invest them with the power of a magician's spell, and insist that they appear everywhere. "Locking up" the logo and tagline is tricky, though, and not just visually: logotypes are meant to have long shelf lives, and taglines...well? There are plenty of warehouses full of three years' worth of business cards bearing taglines for campaigns that were abandoned after three months.

Throughout its 150-year history, the YWCA has been dedicated to two things: eliminating racism and empowering women. I have to admit I did not know this; I just found out on their website. I thought the YWCA was simply the female version of the YMCA. Obviously, I'm not alone in my ignorance, so the YWCA must have decided that their old identity, a stylized Y by Saul Bass, just wasn't getting the job done.

Having designed many identities for non-profit groups, I can imagine what a challenge this must have represented. What kind of typeface communicates the elimination of racism? What kind of pictorial image or abstract shape projects the empowerment of women? One common argument, of course, is the Paul Rand one, the claim that the logo has no inherent significance, and that it gains meaning only through association with the activities of the group it stands for: think of the peace sign or the swastika. But this requires a long-term investment, and for the YWCA, desperate times must have called for desperate measures.

This is the new YWCA logo . Not just the name, but the whole thing. It is quite amazing and as Michael Bierut stated in “The Tyranny of the Tagline” on Design Observer, “it’s amazing it hasn’t been done before.”

Designing Brand Identity: An Essential Guide for the Whole Branding Team, 4th Edition [Alina Wheeler] on Amazon.com. *FREE* shipping on qualifying offers. This is a revised new edition of the bestselling toolkit for creating, building, and maintaining a strong brand. From research and analysis through brand strategy

Dynamic Logo: Dynamic Brand Identities [Lin Xianwei] on Amazon.com. *FREE* shipping on qualifying offers. The exact opposite of static, the brands chosen as case studies for this new volume on logo design were handpicked for their adaptability to ever changing conditions. This versatility allows a secret glimpse into the creative process by presenting every conceivable application from bus stop posters and billboards to temporary tattoos

Dynamic Identities: How to Create a Living Brand [Irene van Nes] on Amazon.com. *FREE* shipping on qualifying offers. The visual book looks into design systems for brand identities that produces identities that are alive

Airbnb unveiled its new logo on Wednesday, igniting a social media frenzy due to its inadvertently sexual design. What does the symbol really stand for?

Make @Airbnb yours. Create your symbol, tell your story. #BelongAnywhere

Africa’s fastest growing pay-TV brand is…Chinese? Landor helped StarTimes expand its vision for one of the world’s most dynamic markets.

Brandisty - Connect your brand to the modern web

Brandisty hosts your brand in the cloud so you can store, modify and distribute it with ease. We handle vector image resizing, typography, color pallet generation, colorspace conversions for digital and print and all without you needing to know Photoshop or Illustrator.

"Most people realize and acknowledge that products or services are without a doubt connected to brands. Nevertheless, it is not always very clear what this connection is. Especially when it comes to ascribing a level of importance to either one. How do you see the relationship of products and services with brands?"

"A sustainable brand identity includes ALL of the above elements plus a concept and design that is:1). unique and distinguishable; 2). efficient and effective in communicating key messages and personality; and
3). used in a consistent manner throughout all visual touchpoints."

"A style guide or style manual is a set of standards for design and writing of documents, either for general use or for a specific publication or organization."

"In marketing, a corporate identity is the "persona" of a corporation which is designed to accord with and facilitate the attainment of business objectives. It is usually visibly manifested by way of branding and the use of trademarks"

I have spent most of my spare time on servicing for nonprofits projects by providing logo designs, strategy consulting on brand identity, and event organizing through online collaboration. Here is a collection of my logo creations.

"Personal branding is the process whereby people and their careers are marked as brands. It has been noted that while previous self-help management techniques were about self-improvement, the personal branding concept suggests instead that success comes from self-packaging."

I acquired over ten years' experience in corporate visual identity design, brand management consulting, and marketing communication activities. This bag is a starting point of my thoughts on branding.

All posts/articles related to Logo Design by Subraa goes here.

We are the manufacturer of aluminium composite panel. We are the first and largest Manufacturer of ACP (interior and exterior both). Our manufacturing unit is in Jammu which is Equipped with lated technology machinnary. Also we have in-house testing lab for ACP Sheets. Our other product range is metal laminate (interior) and wall panel (interior). For...