Documentary based on an article by Tom Junod (Esquire 2003) about a photograph (by Richard Drew) of a man falling from the World Trade Center on September 11, 2001.

The film goes in search for the identity of the falling man and also how the photograph affected many people. Interviews with journalists, photographers and families who lost someone on 9/11. Directed by Henry Singer and narrated by Steven MacKintosh.

The Falling Man is a photograph taken by Associated Press photographer Richard Drew, of a man falling from the North Tower of the World Trade Center at 9:41:15 a.m. during the September 11 attacks in New York City. The subject of the image—whose identity remains uncertain but is speculated as being that of Jonathan Briley, who worked in a top-floor restaurant—was one of the people trapped on the upper floors of the skyscraper who apparently chose to jump rather than die from the fire and smoke. As many as 200 people jumped to their deaths that day; there was no time to recover or identify those who were forced to jump prior to the collapse of the towers.

Officially, all deaths in the attacks except those of the hijackers were ruled to be homicides due to blunt trauma (as opposed to suicides), and the New York City medical examiner's office stated that it does not classify the people who fell to their deaths on September 11 as "jumpers": "A 'jumper' is somebody who goes to the office in the morning knowing that they will commit suicide... These people were forced out by the smoke and flames or blown out." 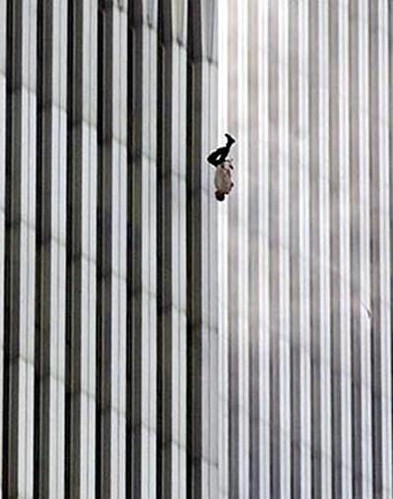 Five years after the attacks, The Falling Man was identified by chef Michael Lomonaco as Jonathan Briley, a 43-year-old employee of the Windows on the World restaurant. Briley was a sound engineer who lived in Mount Vernon, New York and worked in the North Tower restaurant.

In this way, September 11 was a world-historical event because it was made so; its significance partly manufactured by efforts to give a simply deplorable act some greater meaning.

That all said, a small number of images sporadically appeared that betrayed the overarching narrative of September 11 as a world-historical moment. Indeed, what binds a great number of these formerly orphaned images together are their preoccupation with the private moment - a man running for his own life, an office worker trapped, a fireman's expended body and mind.

The closer study of two particular images captures this tension most forcefully.

Phyllis Rodriguez and Aicha el-Wafi have a powerful friendship born of unthinkable loss. Rodriguez' son was killed in the World Trade Center attacks on September 11, 2001; el-Wafi's son Zacarias Moussaoui was convicted of a role in those attacks and is serving a life sentence. In hoping to find peace, these two moms have come to understand and respect one...

The Looking Into the Past Project

A photographer's project using historical photographs has captured history in a contemporary way.

September 11, 2001 is an event that we will never forget. Alongside the many brave human heroes, we should also remember and honor the quietly heroic Search and Rescue (SAR) dogs who, along with their handlers, risked their lives to help save victims of the World trade Center attacks.

Sleeping tablets and pills like Zopiclone, Ambien, Diazepam and Xanax for the treatment of insomnia